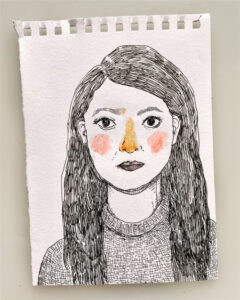 She has written for and with the Royal Court Theatre, the BBC, Islington Youth Theatre, Orange Tree Theatre, and National Theatre Studios amongst others. She recently adapted a collection of myths from Ovid for young audiences for the Royal Shakespeare Company, and is currently under commission with them to adapt stories from Chinese Classics.

In 2017, she was named to the BBC‘s New Talent Hotlist. Her short film script The Match Girl was produced by BBC3 in 2016 for Series 1 of their groundbreaking series #TheBreak.

In 2014, she was awarded a Film London London Calling Award and commissioned to make her first short film: Next Time.

She is also the creator of #OnePoundPoems — a live, verse-making endeavour involving a 1936 Remington Portable typewriter, a handful of willing poets, and the goodwill of strangers.

In 2013, she conceived and created Tiny Pencil — an independent, artist-led, anthology artzine and press dedicated to the lead arts.

Once, she also worked in a morgue.

Get in touch at: amber@amberhsu.com.