A mysterious machine in a room haunted by ghosts made of light, The Restless Spirit Projector is an interactive game designed by children’s author & illustrator Viv Schwarz and Jonatan Van Hove featuring characters and scripts written by Amber Hsu.

Commissioned for the Now Play This 2017 Festival at Somerset House London, this interactive installation invites you to listen in on the secret yearnings of ghosts.

“One of the most popular rooms was introduced with a plaque that read simply, “This room is haunted.” Engulfed in darkness, players used hand mirrors to reflect ghosts (projected sprites) into a trap (a light-detecting orb), pairing them up according to physical clues left around the room – and occasionally removed by the designer Viviane Schwarz – like a notebook filled with handwritten and illustrated stories about the ghosts in question.”
– Jordan Erica Webber in The Guardian

Some of the ghostly fragments gloriously illustrated and animated by Viv, including a lost lichen colony, Kepler, Laika the dog cosmonaut, Galileo, and Arabella the Spider… 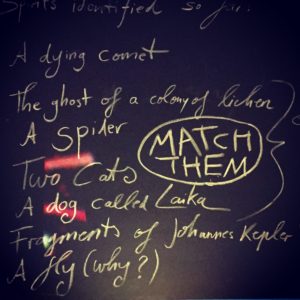 All of the illustrations and animations on this page were created by Viv Schwarz. For more on this game and Viv’s work (including her beautiful children’s books) please visit her website here.